Modern databases generally implement some level of support for geospatial queries. In this talk I want to explore the techniques and frameworks that are commonly used by a variety of NoSQL and SQL databases.

Starting with the mass-market availability of GPS enabled Smartphones, Fitness-Watches and continuing with IoT devices, self-driving cars: Data with Geospatial information is generated and used in an increasing number of applications. Some of the most popular Apps rely on the availability to access geospatial data in an instant, just look at Google Maps, Uber, Tinder and many more. Searching on single-dimensional data is essentially a solved problem, but indexing and searching multidimensional geospatial data requires some specialized algorithms and data-structures. At ArangoDB we have gained some experience about this Topic as we have recently implemented Geospatial capabilities in our distributed database product.

In this talk I discussed the foundations of geospatial datastores. Topics are:

I wanted to add some new features to my homepage and add something out of the ordinary. I had a few ideas I could work on.

So then I thought a little bit about what would be the best way to impress people a little. So I decided to just have some sort of exciting looking visualization on my about page. By chance I came across the product page for Apple’s music streaming service.

They have a 3D model of the earth running with WebGL to visualize the locations of their radio recording studio’s and the upcoming performances on the Beats1 radio channel. So this is how I got the idea to do something similar to visualize some places I visited and get a little ‘wow’-effect from people visiting my website.

We start off using Google’s WebGL-Globe Chrome experiment. This already gave me most of the necessary code to render a sphere and to position little marks on it based on a latitude and longitude. It is based on three.js which allows me to draw very complex 3D scenes with lot’s of objects without neeing to care about WebGL specifics or a scene-graph.

The first real problem was to find a suitable model of the earth. At first I actually looked for a model which would feature a grid of dots, but couldn’t find any. So I turned back to apples implementation and looked at the resources they load to build their globe:

I immediatly noticed that they were loading a greyscale image of the eath’s surface, where all land was white and the oceans were grey. This is essentially a heightmap with only 2 values for land or water (Not sure if there is a different name for this kind of image). What I needed to do was:

First we need to load an image in JavaScript. This is easy enough, we use the Image object to asynchronously load an image with an height-map of the earth on it.

This unfortunately doesn’t give us access to the images content immediately. When we want to access each pixel values, we need to render it onto a canvas and then retrieve an ImageData object from the canvas. This works like this:

To figure out which pixels to actually use, we need to look into the way the image actually displays the surface of the earth.

My map-image shows the earth’s surface as an Equirectangular projection. This means that the spherical surface of the earth is mapped to the flat surface of the image with a very simple linear formula. The distances in the image are basically equal to the latitude and longitude expect for a linear factor.

Now we can sample the pixel data from the image like this:

To add the actual point to the WebGL rendering we use the method that was convinietly provided by the Google’s globe project:

This is actually not quite done yet. The points we choose initially don’t really look good on our model. The spacing is much to close near the earth’s poles. This is a side effect of the equirectangular map projection. The map distorts the surface of the earth and uses too much space for the area’s near the north- or south-pole and uses too less space for everything else. You can see this very well on this map with some indicators painted on them: 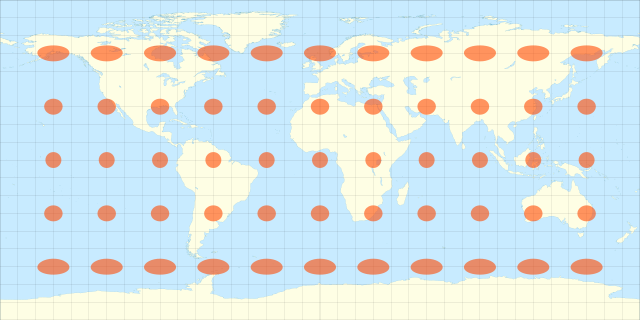 Therefore we need to adapt the placement of our samples a little bit and dynamically change the spacing. You can check out the code for this directly on github Visualized the placements of my samples looks like this:

And that’s basically it! All other required modifications of google’s project were just the removal of unnecessary features like some custom shaders and changing some colours.

Check it out on my about page

Recently Google released Chrome for iPad and iPhone, my first thought when I watched the announcement on Google IO was: ‘Why isn’t there at least Firefox for iPad?’. After all it’s not that hard to develop the UI components like tabs and the other stuff that’s needed for a modern tablet browser (I actually designed a tab component: SGTabs).

So I decided that I should spend some time and try to build a reasonable complex prototype by forking Firefox Home for iPhone. I choosed the codename ‘Foxbrowser’ to indicate the long term goal of the project. I needed a few components to support all necessary features